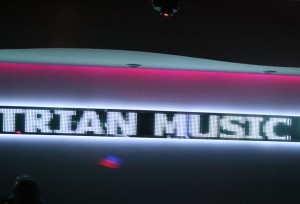 Under the title “Austrian Music Box – a Journey through Austria from Classical to Pop!” this year’s AustrianNight@MIDEM followed into the footsteps of the 2009 edition when well-received artists like Valerie, Tanz Baby! and Parov Stellar presented the first “Austrian Music Box“, a thoroughly selected compilation of what Austrian music sounds like in the 21st century. Now as the second volume of the Music Box is out (naturally in time for the MIDEM), Austrian music continued its journey across the genres of music – from Classical to Pop! This time featuring !Dela Dap, Herr Tischbein, Mika Vember and the Danubia Saxophone Quartet.

MissionCulture supported the tour to France on behalf of Rossori Music&Event, the main organiser of the Austrian representation in Cannes at the MIDEM.

The unforgettable and well-crowded concert took place in the Sparkling Club in Cannes on 28 January 2012 in the frame of the newly introduced “midem-off” festival.